Seth Godin recently wrote a post on good writing habits. He says that the reason business writing is so bad is that people are either afraid to say what they mean, because they might be criticized, or afraid to be misunderstood and thus criticized. I believe that the same can be said of bad speaking habits.

In 2009, I wrote a series of posts based on the book Made to Stick by Chip and Dan Heath. One of those posts was about the importance of being concrete in our words. As Seth Godin says, “If the goal is to communicate, then say what you mean.” Unfortunately, many speakers do not.

In his post, Godin provided a link to a 1946 essay by George Orwell that I first read years ago entitled Politics and the English Language. It is as relevant for writers and speakers today as it was in 1946. I encourage you to read the entire essay; it is excellent both for its analysis and for the wonderful use of English. However, if you are short on time, I have condensed it below.

Remember Orwell’s words the next time you are preparing a speech. 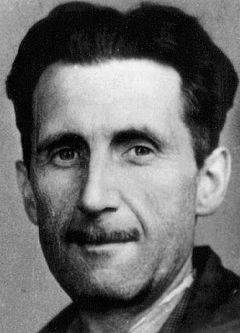 Politics and the English Language

Most people who bother with the matter at all would admit that the English language is in a bad way, but it is generally assumed that we cannot by conscious action do anything about it. …

Modern English, especially written English, is full of bad habits which spread by imitation and which can be avoided if one is willing to take the necessary trouble. If one gets rid of these habits one can think more clearly, and to think clearly is a necessary first step toward political regeneration: so that the fight against bad English is not frivolous and is not the exclusive concern of professional writers. …

[Orwell then gives five examples of bad writing from essays, letters and pamphlets.]

Each of these passages has faults of its own, but, quite apart from avoidable ugliness, two qualities are common to all of them. The first is staleness of imagery; the other is lack of precision. The writer either has a meaning and cannot express it, or he inadvertently says something else, or he is almost indifferent as to whether his words mean anything or not. This mixture of vagueness and sheer incompetence is the most marked characteristic of modern English prose, and especially of any kind of political writing. As soon as certain topics are raised, the concrete melts into the abstract and no one seems able to think of turns of speech that are not hackneyed: prose consists less and less of words chosen for the sake of their meaning, and more and more of phrases tacked together like the sections of a prefabricated henhouse. …

As I have tried to show, modern writing at its worst does not consist in picking out words for the sake of their meaning and inventing images in order to make the meaning clearer. It consists in gumming together long strips of words which have already been set in order by someone else, and making the results presentable by sheer humbug. The attraction of this way of writing is that it is easy. It is easier — even quicker, once you have the habit — to say In my opinion it is not an unjustifiable assumption that than to say I think. If you use ready-made phrases, you not only don’t have to hunt about for the words; you also don’t have to bother with the rhythms of your sentences since these phrases are generally so arranged as to be more or less euphonious. When you are composing in a hurry — when you are dictating to a stenographer, for instance, or making a public speech — it is natural to fall into a pretentious, Latinized style. Tags like a consideration which we should do well to bear in mind or a conclusion to which all of us would readily assent will save many a sentence from coming down with a bump. By using stale metaphors, similes, and idioms, you save much mental effort, at the cost of leaving your meaning vague, not only for your reader but for yourself. ...

What is above all needed is to let the meaning choose the word, and not the other way around. In prose, the worst thing one can do with words is surrender to them. When you think of a concrete object, you think wordlessly, and then, if you want to describe the thing you have been visualizing you probably hunt about until you find the exact words that seem to fit it. When you think of something abstract you are more inclined to use words from the start, and unless you make a conscious effort to prevent it, the existing dialect will come rushing in and do the job for you, at the expense of blurring or even changing your meaning.

Probably it is better to put off using words as long as possible and get one’s meaning as clear as one can through pictures and sensations. Afterward one can choose — not simply accept — the phrases that will best cover the meaning, and then switch round and decide what impressions one’s words are likely to make on another person. This last effort of the mind cuts out all stale or mixed images, all prefabricated phrases, needless repetitions, and humbug and vagueness generally.

But one can often be in doubt about the effect of a word or a phrase, and one needs rules that one can rely on when instinct fails. I think the following rules will cover most cases:

1. Never use a metaphor, simile, or other figure of speech which you are used to seeing in print.

2. Never use a long word where a short one will do.

3. If it is possible to cut a word out, always cut it out.

4. Never use the passive where you can use the active.

5. Never use a foreign phrase, a scientific word, or a jargon word if you can think of an everyday English equivalent.

6. Break any of these rules sooner than say anything outright barbarous.

These rules sound elementary, and so they are, but they demand a deep change of attitude in anyone who has grown used to writing in the style now fashionable. One could keep all of them and still write bad English, but one could not write the kind of stuff that I quoted in those five specimens at the beginning of this article. …